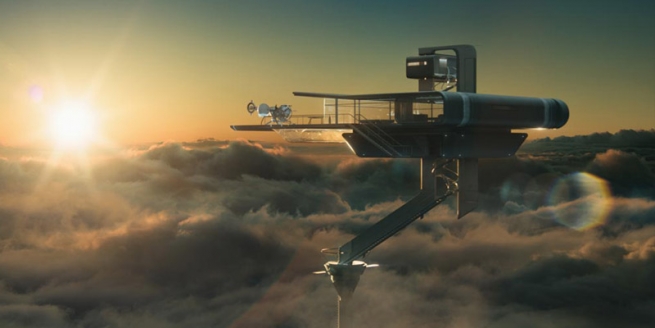 I was introduced to Oblivion at the marketing stage, and I worked on the movie trailer with director Joseph Kosinski and the DP, Claudio Miranda. It was the perfect scenario because a trailer is a mini version of the movie. It saved us a lot of time that we were mostly able to set and agree on these looks before we got to the movie.

Creating a look is mostly about listening to the creative ideas the film-makers bring into a session. Most of the time they have an idea of what they want but I often do look development to give them different versions. For Oblivion, Joe and Claudio had a pretty good idea of what they wanted. The overall look for the film was somewhat dictated by the environment where it takes place. We consciously left the contrast soft and the color at a more normal saturation level in hopes the viewer would relate to it as if it were closer to real life.

The film was shot on the Sony F65 and finished in EXR. I color corrected on a Lustre using a Float Conversion LUT. Learning and working with the EXR file was a technical challenge, as the EXR file utilizes a wider code value than the Lustre could work with without a Float LUT. The Float LUT brought the outside code value back into range so I could color correct it. This was not very well communicated so there was a bit of trial and error.

In addition to the Float LUT, I color corrected using a viewing LUT designed by the Technicolor Color Science team. The viewing LUT gives some density to the image as a starting point for grading so the color corrector doesn't have to work so hard to create a basic picture. This LUT is also called a "Show LUT".