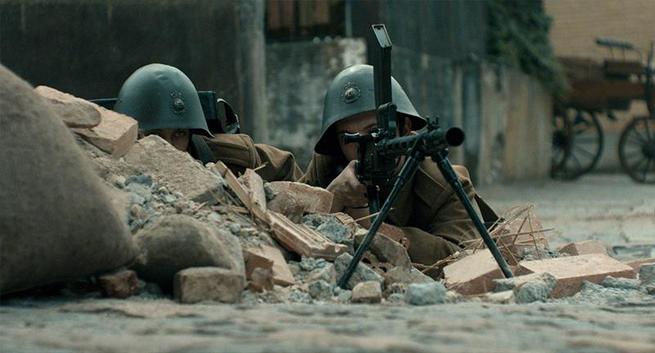 T he director Roni Ezra and DoP Philippe Kress had just finished a low-budget project when this movie got the green light. Before shooting, it is standard procedure to perform camera and lens tests and that was when I got involved. We wanted to create a vintage look, and it was nice to see what happened, or at least get an idea of what would happen with different lenses. In terms of color, we also wanted to see, beforehand, if it would be an issue to subtract green color in regards to the uniforms. The film was shot on Alexa with xxx lenses.

It's better to overdo the look. Then subtract. If you want an overly saturated look, then boost saturation to the extreme, and slowly turn it down

April 9th was graded in Filmlight Baselight Two and we worked with 2K ProRes files. Ezra didn’t come with images for the grading session, but he came with a mindset of trying things out, also things you wouldn’t normally do. We tested a lot of different looks, and mixed them all together, subtracted a little and added some more. In the end, we found a vintage look that also looked somewhat modern.

The trailer is a little more extreme than the movie ended up being because we found that we got a little tired of looking at that amount of grain and high contrast for 90 minutes.