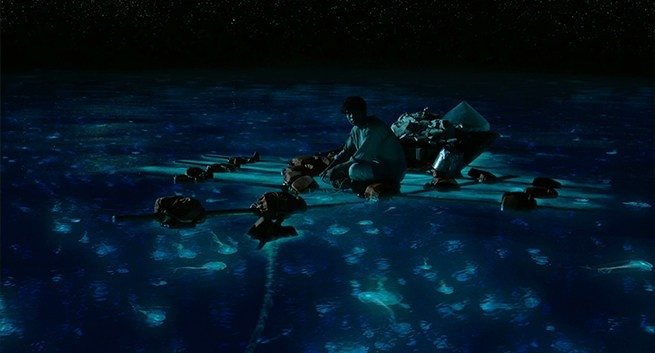 
I was introduced to Life of Pi in pre-production. To cram up on the story, I listened to the audio book (while finishing up another film) so I’d be able to visualize where director Ang Lee and DoP Claudio Miranda might take it. Much like everyone else, I had no idea how they were going to pull it off.

As I had previously collaborated with Claudio on Tron: Legacy, we started discussions early and worked together to establish a LUT for dailies. We were in contact throughout the shoot and he would occasionally get me to review certain shots to make sure we were good for later work.

The serious start of look development occurred after the first director’s cut was made. We sat down and watched the film at the Fox lot and we talked through ideas as the movie played through. We followed along with our running sheet and made appropriate notes. After this, a full colour bible for the film was created. We would take three or four shots from each scene of the movie and experiment and hone looks. These would be iteratively updated based on Ang’s notes.