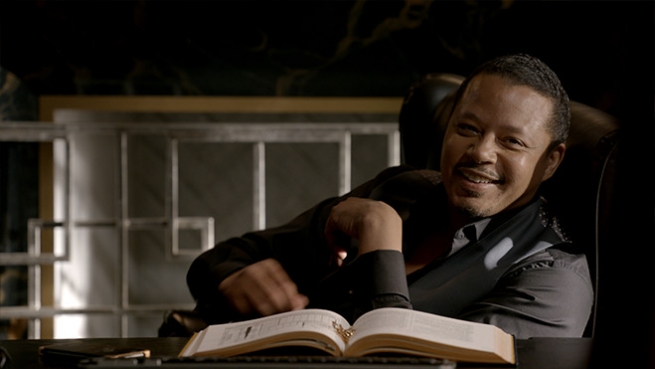 As a dramatic show, "Empire" combines many genres and cinematographic styles, but also pulls from diverse styles as a highly sophisticated 'music performance' show. The rhythm of these scenes and stories fusing together gives a great opportunity to tell the story through color-correction!

Empire's Cinematographer Paul Sommers and I have collaborated for years. Paul took over the show after Season One and brought me on board. Paul increased the dramatic and stylized look of the show ten-fold. He is a master of building and balancing tension in the scenes. His courage and sense of style also comes through in the staged performances. He is not timid.

I think Paul and I both draw on our diverse histories in television, features, and music videos for references and inspiration. We want to use the various looks of the scenes to telegraph the changes in mood and create foreshadowing. The looks can be subtle or more evocative. We use a range of vocabulary, from benign and hopeful to polluted, toxic, dangerous environments, and/or anything that matches the feel of the episode.

On some shows, I have the creatives in the room with me. I can suggest my own ideas in real time and they are right there to respond. On Empire, I’m left alone to color the entire episode with Paul’s written tone notes and the dailies color as a guide. Looking at the dailies, can see how the creatives have been viewing the cut and the direction so far. I might throw out what’s in the dailies and do my own feel but I will always keep the dailies in my head so I know what’s been set. If I make a strong change in a scene it will make a big impact, so I need to be ready for a reaction. Hopefully, I'm moving things in a positive direction more often than not!

It's my job to ride the edge to make the show as punchy as possible. That said, the story comes first. The rhythm of the show may indicate that we relax the contrast or starve out the saturation for the feel of a certain scene.