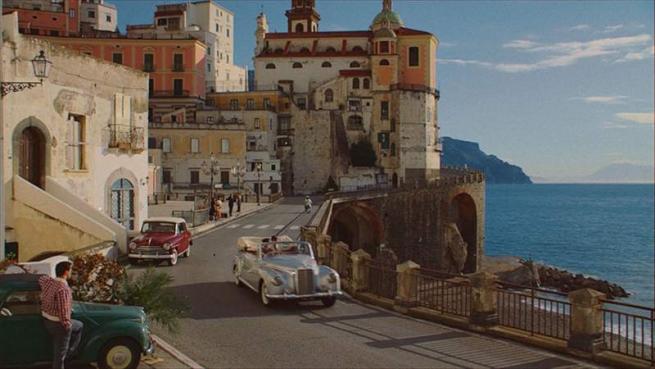 
The concept of bringing Audrey Hepburn™ back to life in CG form came about several years before the ad went into production. When we found out Daniel Kleinman was confirmed as Director and that the project had the green light we were all very excited and the team headed off to the Amalfi Coast to shoot.

From a Colour perspective, our ultimate vision was to create an authentic, Technicolor-esque print look. The 3D team had amassed many films and images in preparation for the shoot and I was able to grab key scenes of daytime exteriors which helped me to create the final look of the film. I considered a number of films of the period as reference including Charade, My Fair Lady, and Breakfast at Tiffany's. There were a number of elements that inspired me in these films: rich contrast, deep colour – sometimes so separated it almost forms block colour, at its most extreme.

Colour often goes deeper than rods and cones; it’s a personal, emotive representation of a piece, offered by the individual artist

DOP Joost Van Gelder shot the film in ArriRaw format on the Alexa Studio camera, giving Daniel the ability to reframe the 4/3 image. We decided to employ a ‘film’ pipeline, i.e. working on visual effects on the raw, adding the grade on the final comped pictures. This workflow enabled our 3D team to work floating point to the raw and allowed me the benefit of working with alphas at the back end.

We had an initial grading session using DataLab-conformed Log-C conforms, which ultimately were superseded with conforms from Hiero, from which I got linear EXRs. I fed LUTs through for the nuts and bolts of the grade, omitting windows, complicated keys, and other effects such as softening and grain, which would be considered at the end of the final grade session. I considered Kodak and Fuji LUTs early on, but quickly decided I'd go LUT-free as there was too much remapping of primaries required, which I wanted to remain pure.